We are now living full time in Northeast Iowa, and working on the new gardens. It will keep us busy for quite a while...

As an avid gardener since I was about 7 years old, that gives me over 45 years of experience gardening in this part of the world. And every year teaches me a bit more.

Happy to report, my orchid is blooming again! Bllra. Big Shot 'Hilo Sparkle' which my son and DIL gave me two Xmases ago. I repotted it at one point, it didn't do much that year, but this year there is one nice stem. Unfortunately I'm still not keeping it quite damp enough, apparently, as indicated by some accordion pleated leaves. But it's put on a pretty good slug of new growth, from 3 bulblets up to 8.... 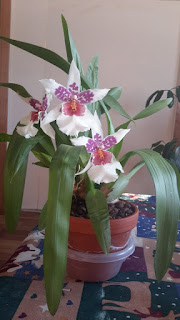 The unnamed phal from the supermarket is sending up a spike, too, so looking forward to seeing that in a few weeks/months....
Posted by Stella's Gardens at 4:21 PM No comments:

Neglect of the Blog

Soooo It's been almost a year since I posted. We have been busy, that is for sure.

The brewing continues, with many ciders and meads and some country wines either in secondary, in the bottle, or long gone. Now that we've actually had some real apples 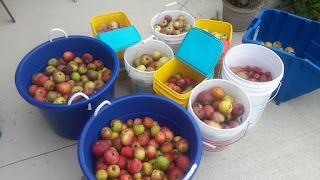 and pressed 15 gallons of juice, rather than using store bought, we can say we've got real cider on hand. It's still clearing in secondary in the 45*F storage room, to be bottled some day. 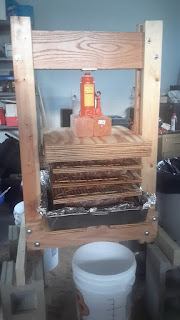 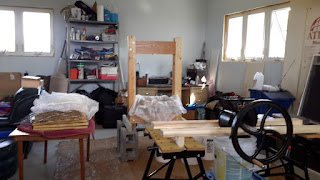 We've made 4 beers, extract and partial mash, and when the weather ever warms up we can make the next one. That will be an all-grain lager. Until we get above 35*F or so, the beer will have to wait, since the brewing is in the garage!

We have a total of six raised beds below the barn, and the two older ones above. The plans are for at least 5 more between the driveways. So it will be a busy year. 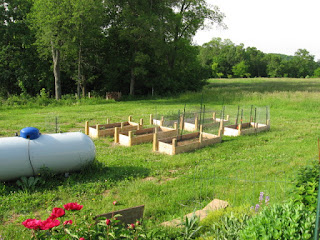 Posted by Stella's Gardens at 11:39 AM No comments:

It's the third of April. The last few days of nicer weather have melted the last of the 10" of snow we got two weeks ago, the surface of the soil is drying a bit, and I am thinking about doing more than JUST cleaning up last year's debris. Baby plants are sprouting and there are two more cedar beds to build...the new stone rose bed to put together and plant...grass to sow...Monday the first four of the new fruit trees arrive. Of course there is cool weather and April showers on the way, so I will probably go out tomorrow and dig the holes for those.

In the meantime the cidery/meadery has been up and running! Experimentation is fun. Sort of part chemistry, part biology, part witch's brew.  The best so far is a raspberry-accented apple cider, and Graham's English cider (more on the way!) Some blueberry-apple didn't come out very blueberry-ish, the two versions of cherry-apple are decent but not so exciting. Have a blackberry-apple and a strawberry-apple in secondary stages, looking forward to those. And several meads - plain, apple and grape - and some Skeeter Pee (lemon wine.) Lots of good stuff bubbling and in bottles!

Things that keep me from going bonkers when I can't get out and garden :-) This is not the whole set currently in fermentation, but it is representative.... 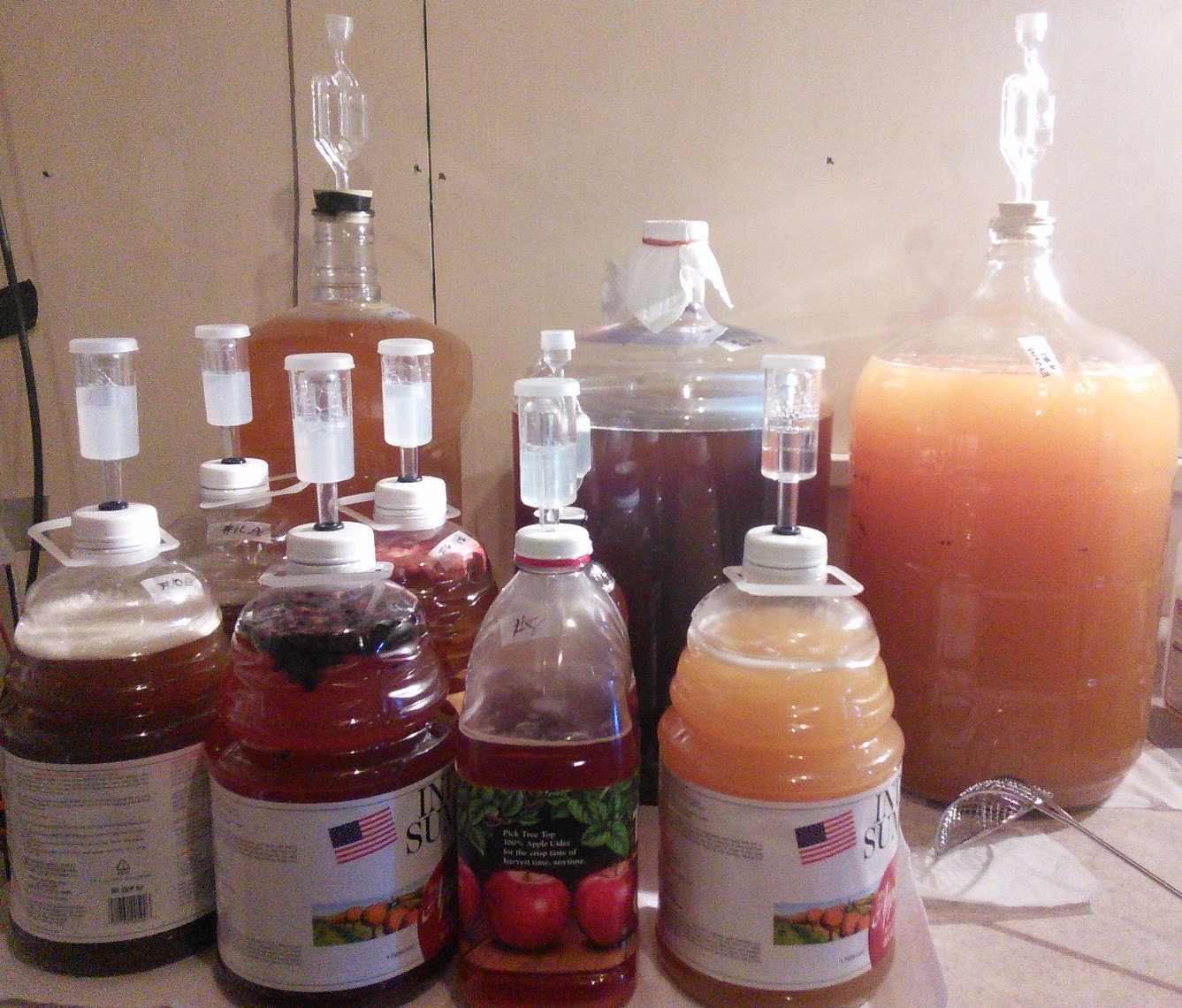 Watching birds - including a sharp shinned hawk or two that have snagged several birds from near the feeders. So feeders are being reduced and redistributed. Did see this interesting fellow: 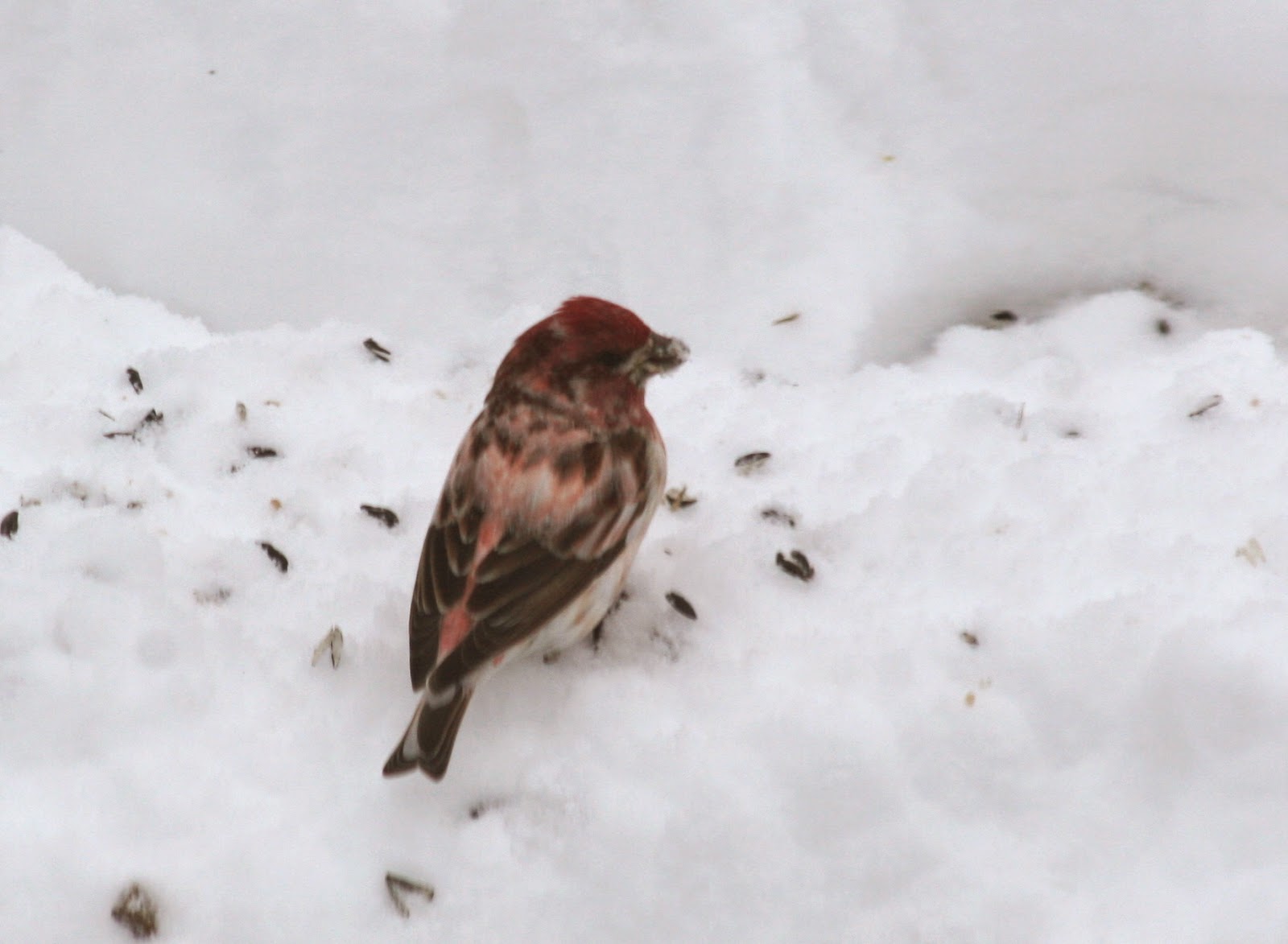 Thought for a moment it was a redpoll but he appears to be a purple finch with lots of white feathers. Only saw him the one day though.

Posted by Stella's Gardens at 5:00 PM No comments:

So it's the dead of winter, and I am finally finding time to post. After a wedding and a funeral, selling the old house and getting settled in the new, the holidays and modest family issues, it seems as if we actually will have a little time to find our routine.

Doing the Cornell Feeder Watch this year (http://feederwatch.org/) and so all the feeders are out behind the house where I can see them from the comfort of the living room window. Took this pic this evening to show the arrangement, including the brushy and woodsy areas where the birdies live (and the view!)


Then moments later, there were cardinals everywhere - my record here, 11 in view, but I think only 8 or 9 can be seen here:

But now it's time to plan the gardens - including this area, destined to be lower perennials and grasses so the view from the lower level is not impeded. Butterfly and bird garden - there will be three areas in the back yard, plus plantings to enhance the "wild" area below, hopefully won't look quite as forlorn this time next year....

Happy winter to all!
Posted by Stella's Gardens at 5:21 PM No comments: